Our path to our camp at Skutari - then to Sparti, Tripoli, Korinthos, McDonalds and Estia.

We drove, on Sunday, south, looking for a place to camp. We found nothing - because it was in August (all Europe seems to appear in Greece during August - particularly folks from Germany driving huge mobile homes (why camp?)). We passed Stoupa, and there must have been 500 people in our "private" camp site from 2 years ago. We passed many possibilities - but they were either not private, or inaccessible, or just plain unsuitable to one of the three of us. As we approached Gythio, we decided to stay in a commercial camping place and so we registered. We went to look for a camp site - and it was micro-patras with all the sights, sounds and noise of a large town. This was not for us - so we left (it was now 10 or 11pm). We returned to a small isolated beach near Skutari and decided, at least for the night, we would try this. We put up the tent, collapsed, slept and in the morning, woke to a man starting the engine in his fishing boat. This was Kanellos, our new friend - who shared everything with us - but it was the mountain water from his well that gave us new life.

And so here is the tracks for locating our camp site, then fishing with Kanellos and visiting the local taverna 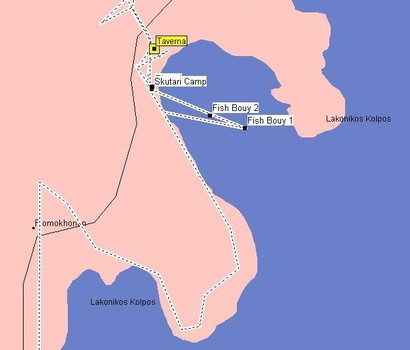 Our friend, Kanellos, gave us a new understanding of Greek friendship and gave me the possibility to fish with him on the boat. So, with camera and GPS, I went fishing - with about 1 km of net trailing the boat. 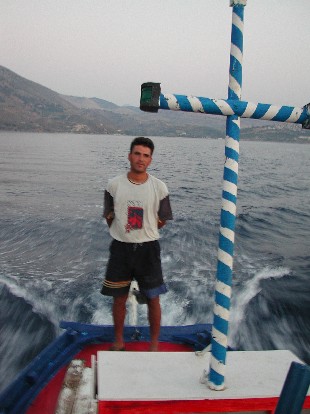 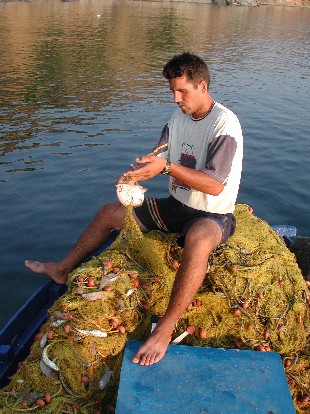 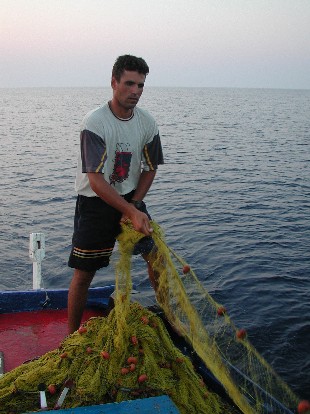 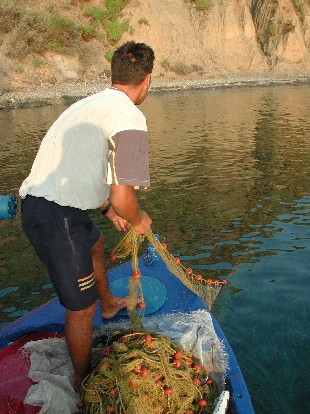 And there was the brother of Kanelos, Panogiotis (probably spelled incorrectly) who was fishing from a row boat. He "lived" in a small cove, next to our beach - and each day we passed each other. This family we came to know was very unusual, friendly and has touched all of us in ways we cannot describe. 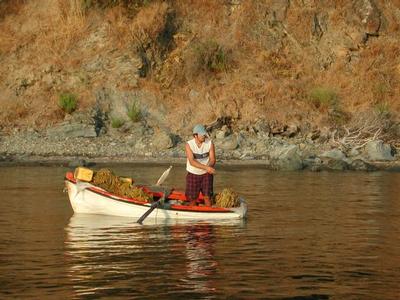 In addition to fishing, snorkeling, teaching Laura to dive, we actually did some science. Laura worked intensively on her phase synchronization problem, 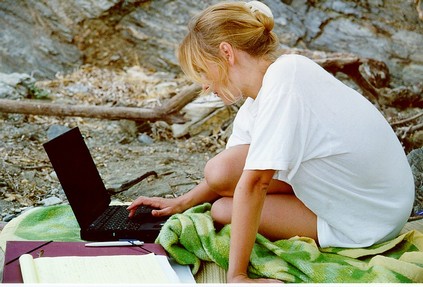 while Adi and I observed the porperties of a granular gas - something we learned from Ko van der Weele, a delightful Dutch physicist who inspired us with his lecture at the workshop. Below, you'll see that there is a periodic accumulation of large granules of sand that reveals a sinusoidal pattern at the end of each water wave. The wave kissed the beach at about a 10-15 degree angle. By morning, the wave pattern (driving function) had changed and the sinusoidal pattern of sand granules had more-or-less disappeared. 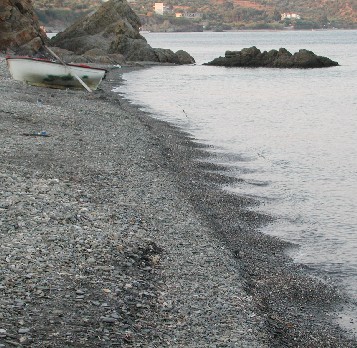 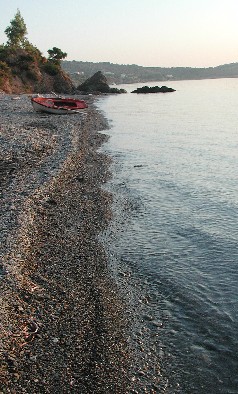 We watched (actually I watched, Adi and Laura sleep much more deeply than I do) the sun rise each morning (some discussion about where it actually appeared, Adi was correct, I was wrong) 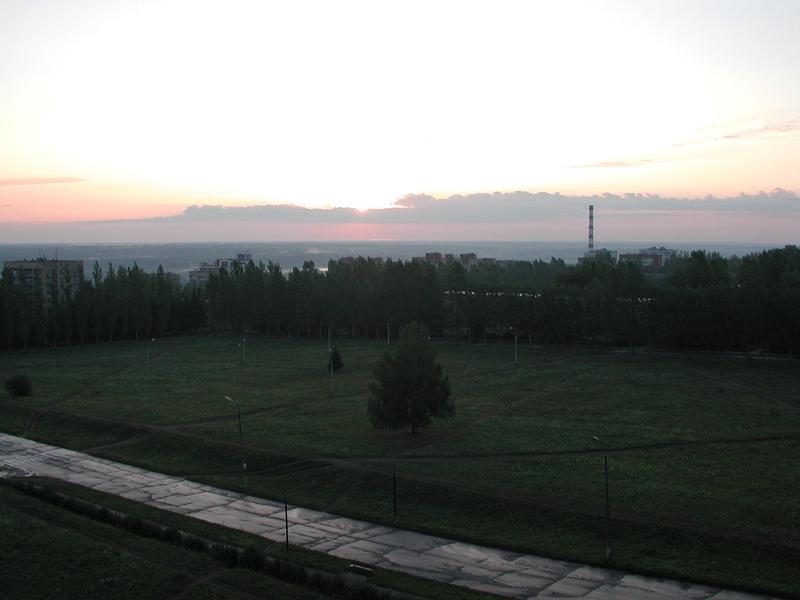 The boat of Kanellos, was always the first to be kissed by the morning sun, and soon, arrived Kanellos. I invited myself for fishing one day - and together, we set out in his boat - laid out 1 km of net and returned home. The next morning (about 6am ) we returned, pulling in the nets and extracting the fish. Kanellos is a one man marvel. Such concentration and care with his fishing. I had a GPS to mark the locations - and his humble observation: I need no GPS, I have a brain. We laughed, but it was true - I, with a sort of over-dose in electronics (camera, laptop, gps, palm pilot) and Kanelos with his head, his hands and his smile. Not only that, Kanellos failing to give us some of the fish, decided instead to secretly prepare the fish for us - lightly floured, fried in olive oil with a little oregano and lemon juice. Food like this is not available in the taverna and certainly not in the US! Could it be that there was a secret ingredient: primitive camping, where everything has a better taste?

So this was this years adventure - together with our new friend 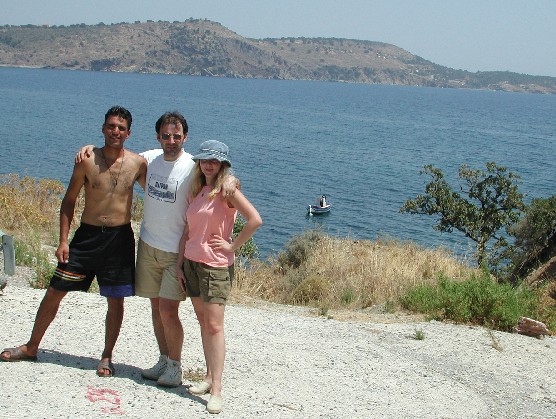 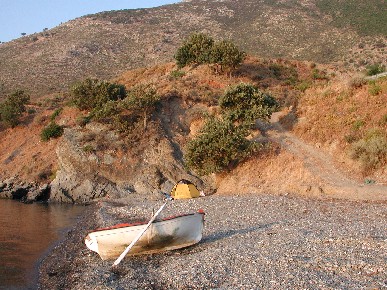 And again, the moon kisses the water leading to our tent, and we say good bye for another year 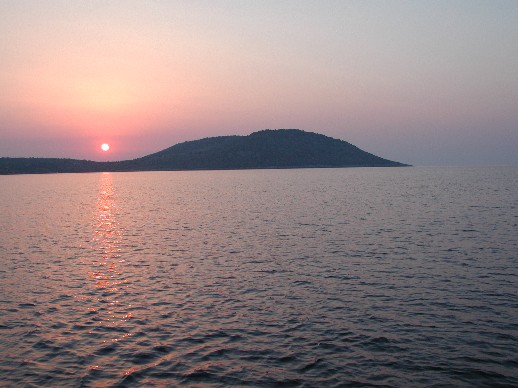